Coming Soon to a Grade School Near You

May 12, 2009
If you have little kids in government school, or progressive private schools, perhaps you'll want to watch this 20 minute long video, Story of Stuff, on YouTube so you can prepare yourself for the onslaught of self-hatred and victimization your kids will come home feeling after they watch as part of their “education”.

The New York Times reports "Story of Stuff" is the next big thing in environmentalist propaganda in the classroom. Of course, they don't report it that way; the Times actually calls it "cheerful" as its simple drawings and friendly presenter are accessible to even the very young. I don't think that the shaking, desolate line-drawn individuals standing on their little piece of destroyed earth – who have no alternative but to work in nasty factories and poison their own babies through their toxic breast milk because you had to have an iPod – is "cheerful" even if the presenter refers to it in scare quotes as the "beauty” of the system. 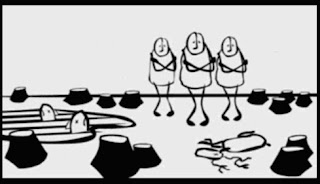 In laying out the materials economy system (a phrase I found only in conjunction with capital “E” earth and “green” sites) in simple terms, the presenter successfully alarms the viewer about the catastrophic side-effects of that system which are ignored by our insatiable consumerism. Furthermore, while instilling the idea that we are victims of the “golden arrow” conspiracy between the government and the corporations designed to make us feel bad about ourselves in order to perpetuate unbridled consumerism, we are warned that we don’t feel badly enough about our unintentional poisoning of babies, killing of animals, and eventual annihilation of our planet.

That is a whole lot of stuff.

Very few adults will question how exactly the iconic big fat corporation can force people to work for them and to buy their goods, but might gloss over this suggestion as a fact. Even fewer, I’m afraid, will recognize that it would have been appropriate to represent the government as a tank, not as a criticism against the supposed disproportionate military spending of our government as the presenter implies, but because the only contribution the government can offer to any problem is to act as a vehicle of force.

Presentations like this actually seek to negate the government's only proper function as protector of the rights of individuals to act in their own best interests; instead, they support forced, collective behavior modification in order to keep men in line with the man-hating world view of the religion of environmentalism. Whatever valid points may have been contained in the video (i.e. legitimate rights violations) are lost in a sea of blind devotion to Mother Earth and the mistaken idea that government is supposed to “take care of us”.

If adults can't see through the presenter's pleasant demeanor to discern her destructive ideology, children certainly won't be able to defend themselves against these bad ideas. At the very least, each will harbor a big scarlet "C" for the shame of his consumerism. 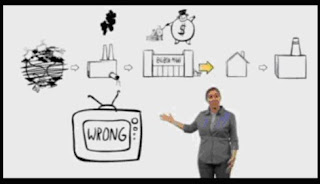 My child’s education is not a social experiment for the apologists of modern technology. No one’s should be. Be on the lookout: the comprachicos are alive and may very well inhabit a grade school near you.
government intervention government schools importance of ideas

Deb said…
It's not confined to public schools, either. The moms on my local homeschool list are enthusiastically chatting about this video and sending it around.

Sigh. We People of Reason are just such counter-cultural outsiders, sometimes. Nice to have this community.
May 12, 2009 at 7:32 PM

I guess I'm surprised that it hasn't yet shot through my local homeschool community (or if it has, I was smartly left off of the cc: list).

So tell me, do you bother to speak out against things like this, or is that like shoveling sand against the tide?

I'd like to think that my friends have not yet begun to dismiss me out of hand as that "cranky lady whose politics we just can't figure out" and would at least be open to reasoned arguments against what it has to say.

Futhermore, I can hardly believe that any parent wants her kid to feel responsible for poisoning babies and destroying the planet!

Rational Education said…
LB,
I was able to take about less than two minutes of that video this first time!! Guess it will take a long time before I will finish seeing it in entirety (if at all!) as I break it up in smaller bites as she assualts the intelligence ad nauseum!!
The two minutes I watched I was not able to keep up with the number of irrationalities the woman was so brazenly spouting as self-evident truths. (It would be interesting to transcribe the video and refute the key myths she parades as uncontestable words of wisdom). The comprachicos have fulfilled their task in this woman's education it is evident....Send her to Africa or the North Pole or better still the untouched, unspoilt planet of Mars -(oh gawd pity Mars!!).

I have two daughters - a ten and eleven year old therefore my sincere thanks for this post.

I ordered 3 copies of "Real Deal on Global Warming" written for children by Al Sonja Schmidt with the intent of passing a book to each of my daughters' teahcers as a class copy and saving a copy for myself. The book is pretty good -unfortunately I have glanced thru it as a parent but have been unable to get my kids to browse thru it! Fortunately my girls, however, have been not too moved by the altruistic crap so far (perhaps because of mom who takes small opportunities in appropriate contexts to make her views known I wonder?!).
Jasmine
May 13, 2009 at 12:16 PM

On the producer's YouTube website, you can find the film broken down into more manageable pieces. And I agree, it would be great to see it combatted line by line.

Deb & Seby's might be worth a read, but I'm not quite ready to buy it. As you may have guessed, it is not something that my library consortium carries either.
May 13, 2009 at 3:00 PM

C. August said…
Jaz, I'd strongly recommend watching the four part debunking of Story of Stuff. It's quite good and allows you to get the gist of the awful falsehoods being put forth without watching every excruciating minute, while getting the satisfaction of seeing it thoroughly destroyed.

Anonymous said…
The "linear system on a finite planet" is bad enough, but then "better than 50% of our tax money goes to the military". Umm, don't think so. Then a real whopper: "It's the governments job to look out for us, to take care of us, that's their job".

I couldn't take any more of it.

August 30, 2008
Vacation was fun, but I like being home. I guess I'm just boring that way. There was plenty of sun, sand, salt water kisses, family, food, and fun. Maybe it was the lack of tutus and tiaras. Now we're all experiencing a slight vacation hangover and need to rest. It's a good thing we have a few days before work and school.
Read more

Stephen and I spent this last week at the Objectivist Conference ( OCON ) in Boston. We started out the week staying in town, but finished it off commuting. As we stayed at the Seaport Hotel at the beginning of the week when we knew almost no one, we didn’t take advantage of the social atmosphere, but were happily sequestered in our room. After getting to know a few people, we dined, drank, and were generally merry with those few. Through the classes, general sessions, and referenced symposiums (in the ancient Greek sense), I left with a calmer sense of purpose, renewed motivation, and a smoldering desire to make the world a better place. By firmly placing the moral foundation under the tremendous achievements of the Founding Fathers first in my own mind, I then hope to help do so in the minds of others who have chosen the fundamental alternative to live, turning that smolder into a bonfire. One of the most immediately motivating things I learned at OCON this week regards the light t
Read more

October 23, 2009
This brief movie by Charles and Ray Eames (1977) does a great job in showing the relative size of things in and out of this world.
Read more